Only a fascist at heart would say end corruption or ‘I will kill you!’

If anything, the Philippines could give lessons to the U.S on how to be an honest to god fascist state masquerading as a democracy.

Trump’s race-baiting and fear-mongering are nothing but nouveau fascism in the U.S.  compared with Duterte.

Who else warns its biggest bureaucracies like the Social Security System, the Land Transportation Office, the Bureau of Internal Revenue, the Land Registration Authority, and Pag-IBIG Fund to simplify transactions with citizens or else…?

Duterte knows where people’s anger lies with government. These are the transactions where governance makes a lousy impression with the people.

So what does Duterte do? He warns his agencies to make things simple for the public, end corruption or, “I WILL KILL YOU.”

They were wearing ball gowns to the SONA event like this was some formal affair. And here’s Duterte is threatening public murder in the name of improving democracy?

That is some chutzpah. Strongman confidence.

Capital F rhetoric. That’s “F” for Fascistic.  Nothing nouveau about it. Old-style and getting tougher. Extrajudicial killings are proof that fascism still works when everyone gets in line.

And in the SONA Duterte was clear there would be no let up. He wants to bring back the death penalty for drug crimes. The drug clean up was the fight Duterte came in on, and he’s not stopping.

Sure there are still anti-administration protests over the desecration of freedoms, and let’s hope that continues. Someone has to push back.

But the general feeling is that Filipinos, even reputable looking ones, are all getting in line following the leader, in the Philippines, even in the U.S.

We don’t even have to talk about a second coming of Marcos anymore. What’s more fearful than what we have? A Duterte driving the Philippines beyond the constitutional speed limit?

He’s pretty bad right now on cruise control. But that’s the word. Control. He has it. And he even challenges opposition. He puts down the Filipinos in general and says, the enemy is us. And then he takes charge, threatens death, and no one says boo.

Duterte appears to be a reflection of the Filipinos who just want things to work, no matter what. Freedom, democracy, civil liberties? Can you eat that?

Ideals are meaningless to the people who just want their live their lives. Sad that we have that low bar in both the Philippines, and even in the   U.S. right now.

As I traveled across America recently, I found an  alarming number of people who have just checked out and don’t connect with the politics of the day.

Too many people don’t see it as relevant. They just don’t care, which means unless something drastic happens, we might just see a continuation of the same, if we’re not careful.

That’s even if somehow something smells funny in our dual democracies, funny how things don’t work out when people become apathetic and just don’t vote.

The strong guys, with their big money backers, will take all the power.

That’s how it works—unless we get nostalgic. We’re coming up to the anniversary of the Aug. 1983 assassination of Benigno Aquino. Would it have made a difference had he lived?

There’s the tough guy Duterte. His frank populism resonates. Take your civil liberties and your bull horns out into the streets. Duterte is all business and in control.

Some people like it that way. He’s so confident he throws it back on the Filipinos and dares his challengers.

Would “People Power” resonate today? It’s an SMH moment as the digital crowd would say. And just when you think maybe the tough guy thing isn’t an act, Duterte reveals his soft side.

Karaoke with full orchestra, singing “Moon River” while an aide holds the lyrics sheet? Fascist with a small “F.”

But it’s still a bigger “F”  than Trump

Trump continues to wreak havoc in people’s lives by putting the fear of ICE raids on the undocumented and telling anyone who looks brown and foreign to “go back,” notably four progressive members of Congress known as “The Squad.”

It’s made everyone think about their “Go Home” legacy. For every Filipino in America the legacy goes back to the 1904 World’s Fair in St Louis.

This was the original program. 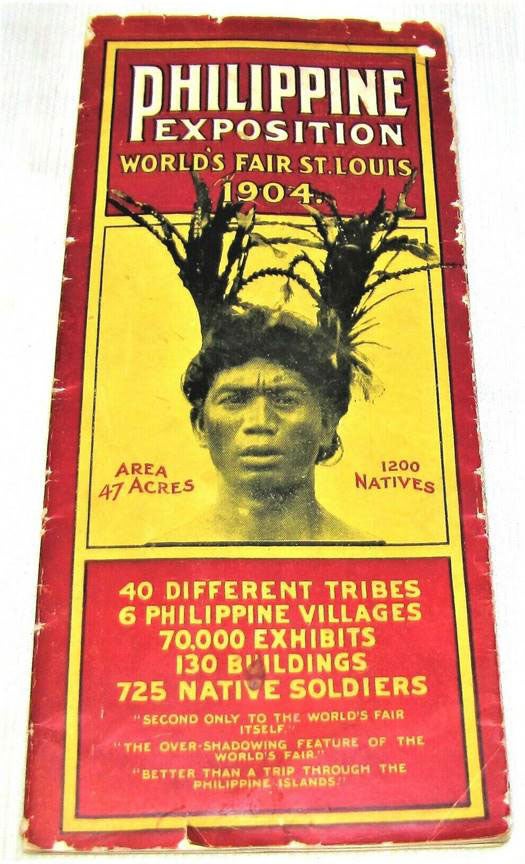 I lost my chance to own and possess it. I wanted it on eBay but was outbid.

It was one of the original brochures of the 1904 World’s Fair. The one that had the human zoos with the Filipinos, euphemistically called a “Filipino Exposition.”

A friend of mine found it for me. During the week of all the “go back” talk, he had come to see my one-man show, “Emil Amok” at the Capital Fringe in DC. (The next show is on Tuesday, but more this coming Friday, Saturday, and Sunday.

On stage, I talk about how after the Philippines had been raped and pillaged during the Philippine/U.S. war–that rebellious post-mortem of the Spanish American War, in which the death toll of innocent civilians is estimated to be a million.

White American show biz entrepreneurs decided to put a happy face on that relative display of American genocide, and help the government sell the colonization of the Philippines to America and the world.

The brochure cover says it all. The exposition would be “second only to the world’s fair itself.” But would it also be our “not-so-red-carpet” welcome to America, our new home?

Or a harbinger of how Filipinos would be patronized and treated in this country, seen not as human beings equal to whites, but as America’s possessions. Not like slaves, technically. Just our first colonized people. And they look so cute, don’t they? Real spear-chucking, loincloth wearing headhunters. And their families.

It’s a real example of history no one talks about. But as I point out in “Emil Amok,” it is America’s gateway to imperialism. Does that begin to explain our lives in America?

The 1904 World’s Fair coincided with Chinese Exclusion process, which began in 1882, renewed in 1892, and then made Chinese immigration permanently illegal in 1902.

In part, the Filipinos were brought in to replace Chinese labor. It’s the reason the Filipino male to female ratio was 14-1. They were workers. Not intended to start families.

The labor purpose seemingly backfired because 30,000 Filipino men showed up, mostly in California by 1930. They were colonized Americans. Nationals. They belonged.

But it was the Depression. Filipinos were taking jobs. And women.

White nativists fearing the “peaceful penetration” by another race would move to exclude the Filipinos, just like they did with the Chinese a generation earlier.

For good measure, anti-miscegenation laws prevented any race mixing. As is often the case in stories, the best part is the sex part. And it really is the heart of my show.

Filipinos in loincloths as Mandingo?

In 1930s America, the so-called “Filipino Problem” was the burning immigration question. There were politicians from Sacramento to DC. One of them was a member of the famed McClatchy media family.

And the focus was just on the Filipino men, those lusty effing rabbits.

It wasn’t asylum seekers or caravans from Central America. It wasn’t Mexican rapists, or MS13 gang members. There were no people detained in cages.

No, in the 1930s, the big immigration issue involved the tens of thousands of single Filipino men, mostly in California, who were seen not just as threatening the sex part of white male privilege, but also the future of ethnic purity in America.

That sounds like it would fuel a “Go Home” story to end all “Go Home” stories. My father was one of those single Filipino men, whose existence in America was framed by the Filipinos caged in human zoos for entertainment in 1904.

That’s why I wanted that brochure on eBay. I didn’t get it. But I can tell my father’s story that continues his journey with my story of Harvard and NPR.

I brought him with me. It’s at the Capital Fringe, this Tuesday, July 23, then Friday, Saturday, and Sunday, July 26-28.

Filipino headhunters in loincloths on display aren’t exactly a feel-good story. It’s something America would rather forget.

Emil Guillermo is a journalist and commentator. He writes a column for the North American bureau of the Inquirer. Twitter @emilamok