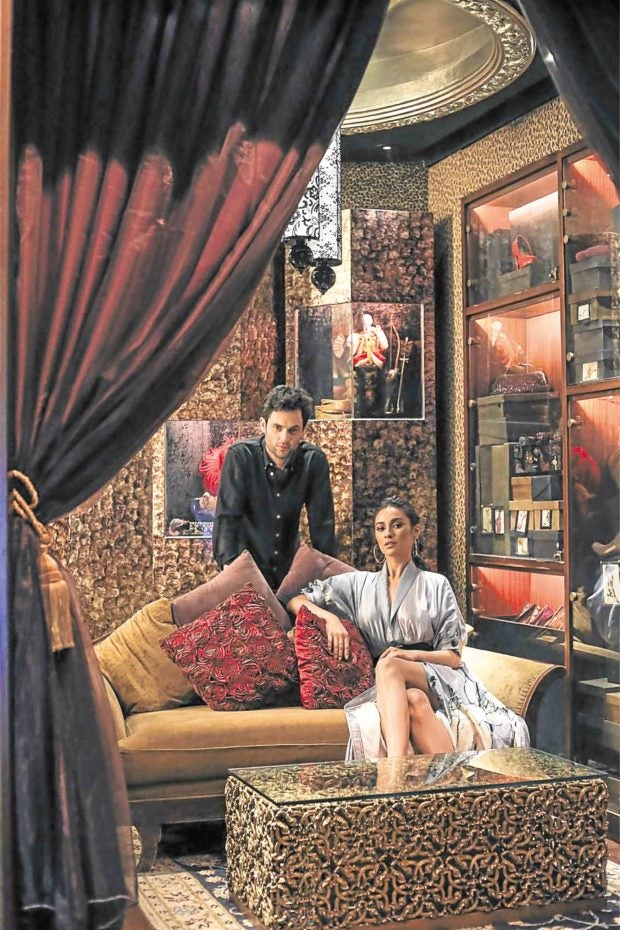 “I loved the head to head nature of (Joe and Peach’s) relationship. Can I say that she points a gun at me?” said Penn.

Can you ask for extra jackfruit for my halo-halo?” Shay Mitchell said.

“You’re eating halo-halo?” asked Penn Badgley, wondering why his “You” costar was ordering the Filipino dessert again when, just yesterday, the two of them had shared a monster-sized one at the lobby of the Peninsula Manila.

“Yes of course,” Shay said. “It’s so good. It’s so refreshing. When you see my little version all mixed up, you’ll be like, oh I get it.”

Penn, who was in the country for the first time, had a cup of coffee with the massive halo-halo from the previous day, and netizens quickly pointed out the brewing disaster. We told him this and he laughed. “I’m American,” he said.

Listening to Shay and Penn speak is like watching two friends rave about a show they just watched. During the press conference, when Penn took his time to answer a question, Shay quickly took over, and vice versa. 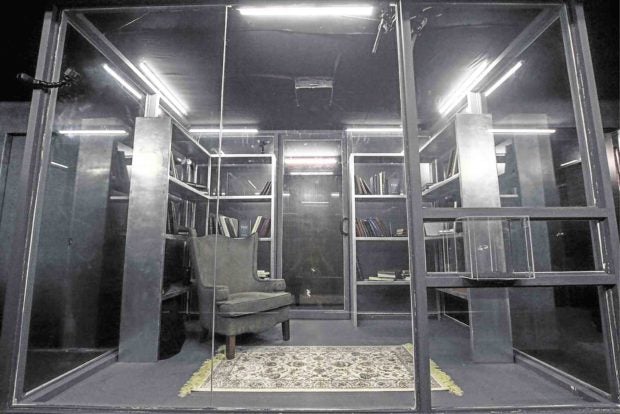 “I love working with Shay. I really did … because I feel we’re quite different. But then we just really mix well, like the ingredients of halo-halo,” Penn said during his first of his many meetings with the press.

Their real-life chemistry makes it hard to fathom that their characters in the show are mortal enemies who refused to call each other’s name on purpose.

In the show “You,” which originally aired on Lifetime and has been picked up by Netflix for a second season, Penn is Joe Goldberg, a bookstore manager who falls absolutely, madly and obsessively in love with aspiring poet Beck (Elizabeth Lail). After their meet-cute scene inside Mooney’s Bookstore, where Joe works, he starts stalking Beck on social media. Through the help of Beck’s public profiles, basic internet search, maps, geotags, hashtags, Joe locates Beck’s home address and begin the real-life creeping.

Among the many roadblocks he faces is Peach Salinger (Shay), the privileged girl who happens to be Beck’s best friend. A tug of war for Beck’s attention erupts between Joe and Peach and, Penn said, “The scenes with Peach were the most fun.” 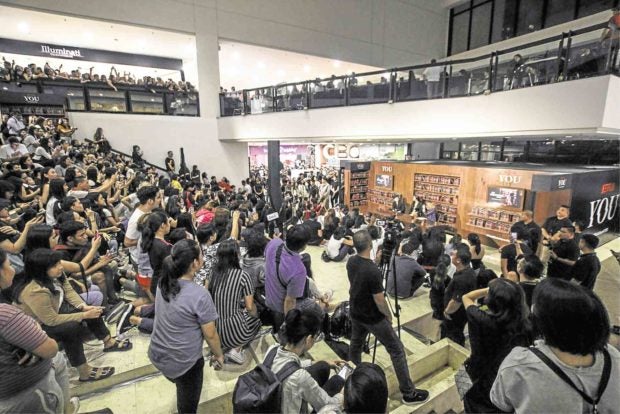 Shay and Penn meet their fans at Greenbelt.

The next day, as Shay waited for her regular-sized halo-halo, Penn talked more about people’s theories that Joe is the evolution of his “Gossip Girl” character. “That was my theory initially. I mean, I saw it from the first time I read the script… This is basically just Dan killing people.”

The 32-year-old actor told Super that Joe’s popularity among viewers, despite being a psychopath, is owed to preppy Lonely Boy. That and Joe is a hopeless romantic.

“And also Penn Badgley! That’s what I think it is! I think if we were to replace Penn with somebody else with maybe a little bit creepier physically they wouldn’t be saying that. You know what I mean? But you’re in love with this image,” Shay agreed.

Although he knew it was likely to happen, Penn is bothered by the fact that fans are romanticizing Joe despite the many, many terrible things he does in the show. “Kidnap me pls,” a fan tweeted at Penn. 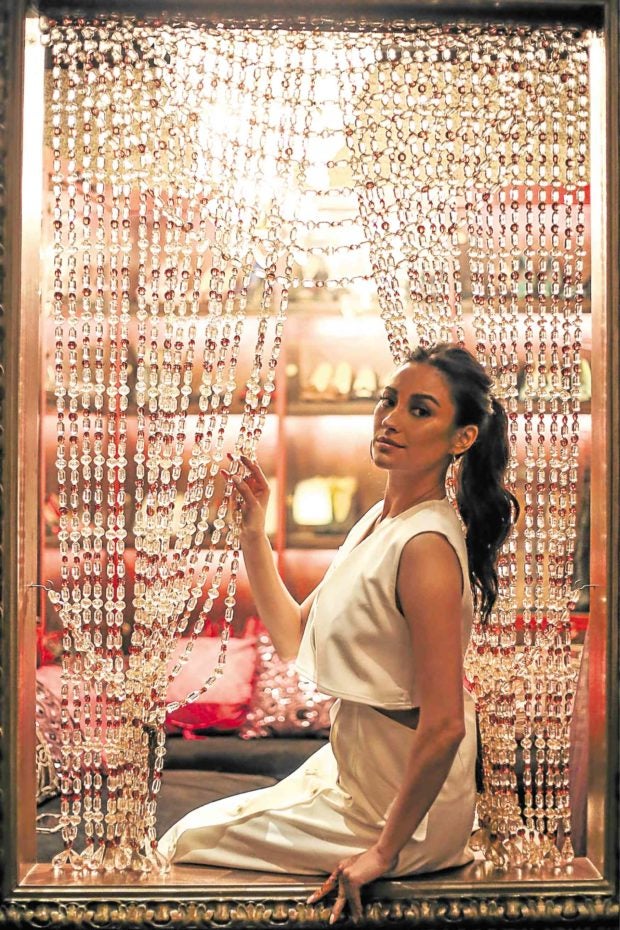 Tone down the charm

Penn knew people would like the character, which is why he tried to tone down the charm (yes, that was him toning down the charm). “It is what I struggled with… I was always thinking, “What? Why? Why am I doing it this way? There were times when I apparently was too creepy or I was too dark and I would be conflicted. The point is that Joe is not a real person. He’s not meant to be like a clinical portrayal of a person who’s truly capable of these things. I think what Joe and the whole show does is it takes a lot of the themes that we see in everything, it takes these same ideas about romance and roles of men and women and chivalry and shows you how distorted some of these ideas we have about about love and relationships are.”

“Joe is a psychopath!” Shay kept repeating throughout her interviews. “I have to be honest because so many people are falling in love. And I’m like, wait, what are we watching the same show? I know he has a lot of likeable characteristics to him, but you can’t have the rest of it not be seen.”

We asked if the fans’ reactions will change the way Penn approaches the character next season. “No because I think that would be dangerous. I mean, I think he’s got to change… I’ve always wanted to see him continue getting more disturbing. He has to, yeah, you can’t just keep enjoying the same thing over and over. (But) the only thing I can do is focus on what keeps Joe alive, alive in his heart and his mind. What keeps him so incredibly optimistic throughout these insane scenarios? And I think it’s because he actually has these qualities that if you only have those he’d be amazing. Yeah, you know, he’s like, really curious, extremely investigative and rigorous in his examination of things and he will go to any lengths for somebody that he believes he loves. Of course, he doesn’t actually love them.”

We told Shay that #JusticeforPeach is circulating on Twitter, a hashtag bestowed upon a beloved character who met an unfortunate ending (remember Justice for Barb?). 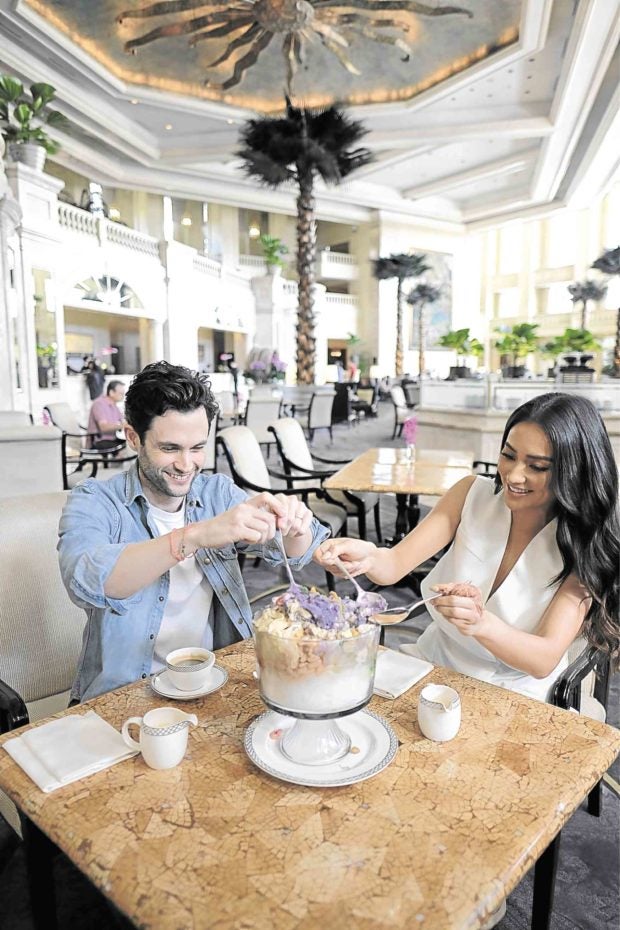 The “You” costars share a monster-size “halo-halo” at the lobby of the Peninsula Manila. -MAGIC LIWANAG AND EARVIN PERIAS

Fans want to see more of Shay in season 2, too. She said, “Lucky for you you get to see her twin sister Lychee come out in season 2.”

Penn said, “And in season 3 her cousin Blood Orange.”

Shay said that to play a character, you have to fall in love with them, so we asked her what she loves about Peach.

“I love that she was different from any character that I played before and you know it’s fun to play the bad girl sometimes and she just had a lot of great lines. The writing was superb and she was fun. And she was wearing heels. I enjoyed being out of runners for a minute.”

Penn, who seems to be unfamiliar with the world of “Pretty Little Liars,” the show where Shay played Emily Fields, asked her, “Did you not…”

“I only wore runners. I was the most casual one. I was Sporty Spice out of the group, like the Spice Girls. And I’m not Sporty Spice. I mean I can be but I like to be Posh, dress Posh.”

Fun fact: The clothes Peach Salinger wears are actually Shay’s own clothes. “Yeah, all mine. I had five suitcases,” she said.

And does Penn love anything about Joe? “That he’s fictional,” he said, adding, ”And that he’s inspiring these kind of conversations about this toxic kind of ideas we have about about masculinity and romance and stuff.”

In the two days that the stars were here in Manila, Super took a page from Joe’s book and did the stalking for you. We followed them closely via Instagram Stories (Shay channeled the Catriona Gray glow with the help of Anne Curtis’ glam team, stopped by an orphanage to bring some goodies for the kids and, as of writing, is in sunny El Nido for some R&R.) and IRL—from the press conference and two sit-down interviews to a photo shoot at Salon de Ning and, finally, their fan event at Greenbelt. 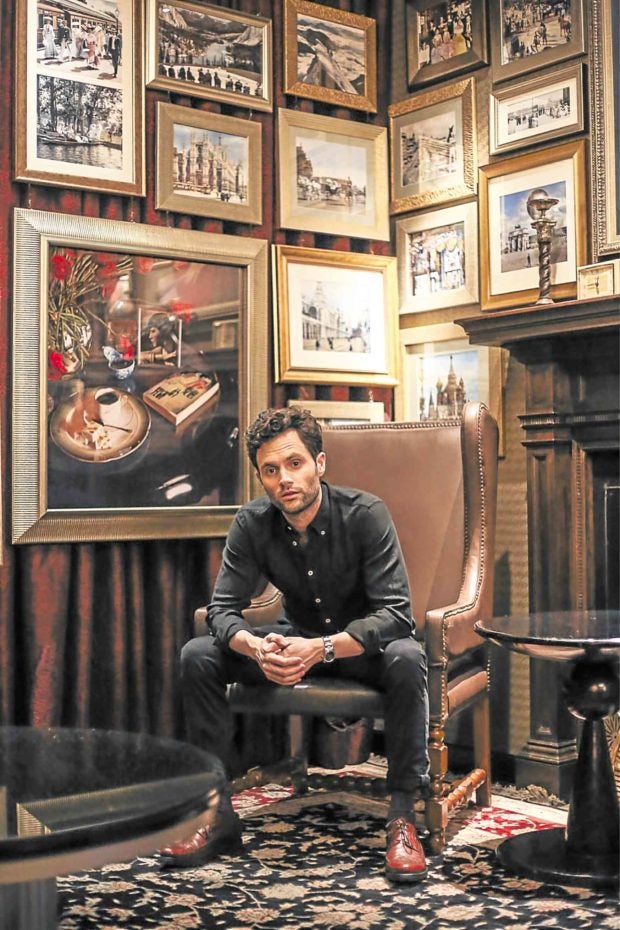 Netflix had transformed Greenbelt Gallery into Mooney’s Manila (we looked for the book “Ozma of Oz,” naturally) for the fan event last Jan. 15. Eager fans trooped to the mall as early as 10 a.m. (the event was at 6 p.m.!). The venue and the mall’s surrounding areas were packed. And there was a secret few people at the event knew: backstage, Netflix had also set up a glass cage similar to the one seen in the basement of the bookstore in the show—the cage where the rare books are kept, the cage that became more and more sinister throughout the episodes. A few lucky fans of the show were brought inside the creepy little reading nook and were surprised by Penn and Shay.

Penn and Shay interacted with the crowd too and answered questions from event host Joyce Pring. The screaming was endless. Everything they did—every little wave, every look, every answer, was met with even more shrieks.

“I feel like we’re two-fifths of the Backstreet Boys,” Penn said.