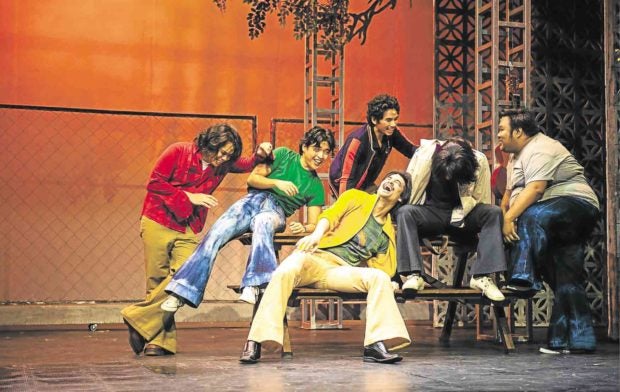 Given the overwhelmingly positive response to “Eto Na! Musikal nAPO!” and the audience’s clamor for it, it was inevitable that 9Works Theatrical would restage its highly popular original musical in 2019.

Director Robbie Guevara and his predominantly “older” millennial cast would sport the ’70s look again to take their audience down memory lane in February at Maybank Theater in Bonifacio Global City, Makati. It will run up to March.

Those who saw the original run applauded its attention to the historical details of the martial law era, the seamless way that the music of the iconic group APO Hiking Society was woven into the story, and the unexpected wave of patriotism the musical generated on a very poignant, powerful note.

This rerun will be faithful to last year’s run. There will be no major cast change, no script rewrite, no change in musical arrangement, or different staging. As Guevara puts it, the creative team had been advised by well-meaning members of the audience not “to touch it.”

But then again, given that it took several rewrites done over a few years to produce the script, with the guiding hand of the APO—Jim Paredes, Danny Javier and Boboy Garovillo—another thematic overhaul might have proven to be anticlimactic.

One major influence the OPM pioneers had on the material was the subtle, creeping introduction of martial law into the lives of the characters, a motley group of upper-middle-class college students in a Catholic university in 1975.

Guevara said that, during the inception of the play, which was intended to honor the musical legacy of the APO Hiking Society, his initial concept was just “a fluffy musical. I didn’t want martial law mentioned nor depicted at all. The APO members influenced that major change.”

Through dozens of table readings and rehearsals, the comments of the APO, who would evolve into a musical symbol of the opposition before the Edsa Revolution, kept coming. In the musical, the off-the-cuff references to curfew and secret student meetings would soon expand and take on new disturbing meanings. The immortal music of the APO Hiking Society is woven into the romantic entanglements of couples played by Jobim Javier and Sab Jose, Mark Bautista and Rita Daniela, and Alfritz Blanch and Marika Sasaki.

The teen characters—led by Mark Bautista, Jobim Javier, Alfritz Blanche, Jef Flores, Jon Abella, Vyen Villanueva and Jon Philippe Go—began to realize that there was more to life than graduating, winning the girl, and making it big in a pop song contest.

The sheltered middle-class environment of these youngsters, who, come to think of it, were already set for life, also distinguished the musical from other Filipino productions set in the same era.

JonJon Martin, a 9Works Theatrical stalwart who wrote the story with Guevara, pointed out that this was one aspect of the era that had been told rarely.

Martin addressed the director’s initial reservations of telling his family’s own experience under the martial law government, and convinced him to dramatize it in one painful, life-changing situation faced by one of the characters.

Beyond their personal experiences, Guevara and Martin, who were kids in 1975, buckled down to research on the ’70s.

They scoured the internet, talked to people who lived during the time, and made a lot of notes on the tastes, habits, behavior and lifestyle of the ’70s generation. No stone was left untouched. Baby Boomers and GenXers, which Guevara admitted, were their primary audience, could instantly relate to the jokes about the hottest restaurants, the flashiest brands, and a newly built, still traffic-free major highway.

Both writers also moved the original setting of the musical from 1973 to 1975 to include more events that happened that later year.

“The target market loved the show,” said Guevara, “from the major mentions like Highway 54 and the Magnolia Ice Cream House to the minor, like Love Bus accidents. I honestly didn’t get any comments from them about what needed improvement or historical accuracy.”

There was one quibble, though: the total lack of mention of the “Saturday Night Fever” craze that sent a lot of young people dancing back to the disco house.

Guevara pointed out, “Dance fever didn’t arrive in the Philippines until 1976. So, no, there really wasn’t going to be any John Travolta moves in the musical.”

A few millennials this writer spoke to had to adjust to the roles that the women, especially the rising socialites, played in the 1970s. Actors Rita Daniela, Marika Sasaki and Sab Jose gave funny and moving performances, but their characters’ dreams and aspirations still moved around their fathers’ wishes or their boyfriends’ attention (or lack of it).

Overall, though, a lot of the audience born in the year 2000 and onward did hum along with their elders during the musical. Guevara said, “The best comment I got when I asked millennials what they thought after watching our show: ‘APO is now a playlist in my Spotify!’” —CONTRIBUTED